Kinps is a small company specializing in audio cables and powerbanks. They have recently produced a small Bluetooth speaker with many qualities. Of course you can use it as a shower speaker, but it is much more than that… 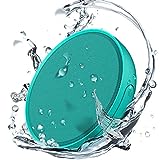 The box is really great-looking, which makes a very good first impression. Inside the box are the speaker itself, the owner’s manual and a Usb cable.

On the side are the control buttons: the on / off button, the volume control buttons, the play / pause / next song button / take and end calls. Too bad not to have provided separate buttons for playback and skipping to the next song…There are also a micro Usb connection and an auxiliary input (3.5 mm). We also note 3 anti-slip mat placed on the bottom of the speaker, which will keep it firmly hooked on all wet surfaces.

2 active drivers and 2 passive radiators bring a massive sound with deep bass. Even at high volume you won’t notice any distorsion, thanks to its 2X5W output power. The bass is particularly impressive. One customer at Amazon even said that the bass was so good that the speaker jumped on the table!

As the name suggests, the sound has a 360° effect, thanks to the 2 drivers. It is naturally stereo.

The SoundCircular has an incredible 32 hours playtime: almost 3X more than most speakers. The company claims that approximatively 600 songs can be played with a full charge.

The Kinps SoundCircular  is the only speaker we have reviewed so far that is IPX8 certified. This means that it can be immersed in water within 2 meter deep. Regarding water protection, this is practically the highest rating in the IP certification system (highest is 9: protected against immersion under pressure). So you can rest assured that the speaker is hermetically sealed, so it won’t fear nor dust nor water.

The SoundCircular can be paired with Echo Dot and play your favorite music via its Bluetooth connection, which has a long range of 20 meters.

The Kinps SoundCircular  is much more than a simple shower speaker: the sound is so good that you will soon take it anywhere with you, and with its IPX8 certification, you won’t fear damaging it, even on the beach, by the pool or underwater! And for less than 30 bucks, it’s really a bargain.

Disclaimer: As an Amazon Associate I earn from qualifying purchases, at no extra cost for you – En tant qu’adhérent au programme d’affiliation d’Amazon, je touche une commission sur les ventes réalisées, sans aucun surcoût pour vous. The iPod Touch is awesome for listening to music and having an excellent[…]

Any cookies that may not be particularly necessary for the website to function and is used specifically to collect user personal data via analytics, ads, other embedded contents are termed as non-necessary cookies. It is mandatory to procure user consent prior to running these cookies on your website.